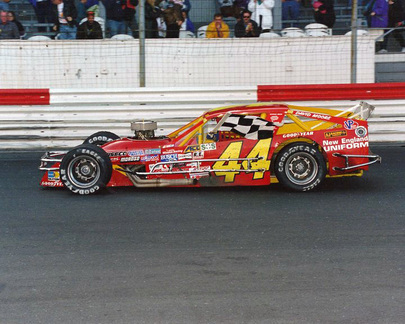 Photo by Gracie Ryan/Tim Riggleman Collection
Here’s a good one that involves asphalt racing with an unusual twist.  You may recognize the iconic NASCAR Modified #44.  Here’s what we’ll tell you:  this car was owned by Mario Fiore, a longtime car owner and lifelong resident of Springfield, MA.  Sadly, Mario passed away in June of this year at 65 years of age.   Here’s what we’ll ask you:  where did this win take place? In what year? Who was the driver?  Hint-- the driver is mentioned elsewhere in this issue.

It was an “against the odds” story.  New York’s Doug Heveron, talented driver of everything from Modifieds to Indy Cars, was originally scheduled to race the #44.  At the start of the RoC weekend, however, Doug was not able to make it.  Billy Pauch happened to be in the pit area in case a ride opened up, so car owner Mario Fiore asked him to fill in. It’s ironic that the eventual race winner’s name wasn’t even printed in the program as a contestant!

Eyewitnesses recall that the 1993 RoC was a good one.  Plenty of lead changes kept the fans entertained.  It was a tough weekend for Billy, however.  During Saturday’s qualifying heats, Billy hit the guard rail.  The car was repaired, but Billy had to go out in the consolation race, which was his last chance to qualify.  He finished second in the consi, which got him into the show – in last place.

Although Billy Pauch’s expertise is in dirt racing, his considerable racing abilities transferred well, and the team’s persistence paid off.  It took Billy 244 laps to go from 43rd to fifth position.  The race announcers mentioned him in 5th position, but had no expectations of a higher finish for him at that point.  Then, in one move, he passed Reggie Ruggiero, Jeff Fuller and Tony Siscone.  After that, he set his sights on race leader Mike Ewanitsko, who had a considerable lead.  Pauch reeled in Ewanitsko with two laps to go.  The crowd went wild.  By the time the checkered flag flew after lap 250, Billy would win it. The rest, as they say, is history.

Billy Pauch, Sr. was inducted into the 2016 Northeast Dirt Modified Hall of Fame in August.  For more information about his racing career, click here to see Buffy Swanson’s article written for the occasion. Her article also appeared elsewhere in the Summer issue of Vintage Views. 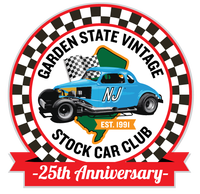